Buck O'Rue is back in print!

For the first time in almost 60 years, the comic strip Buck O'Rue is once again available to entertain readers across the globe, this time in a collection covering the entire run of the strip, plus several months' worth of what appears to be previously unpublished daily strips and Sunday pages. 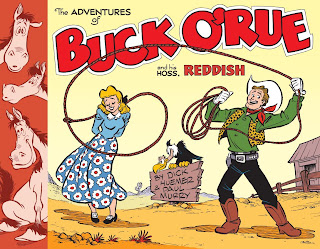 The fifties are long gone, but not the stories they left us. Fans of Disney animation and comics have for decades known about the comic strip Buck O’Rue, created and written by Disney animator/storyman Dick Huemer and illustrated by Mickey Mouse artist (literally!) Paul Murry. Its two-year run 1951-52 is still one of those legendary features many know about, but very few have read. The idea to collect Buck O’Rue in book form was first discussed almost ten years ago and it is now our pleasure to present the resulting book: The Adventures of Buck O’Rue and his hoss, Reddish. Edited and compiled by Dick Huemer’s son Richard Huemer and Murry collector Germund von Wowern, more than 90% of the artwork in the book has been scanned from original 1950s proofs, bar a handful of late Sunday pages we were forced to restore from newspaper tearsheets. The result: Buck has never looked better.

The book is printed in black and white, but the Sunday pages were originally intended to be read in brilliant color. We therefore decided to share our far from complete collection of Buck O’Rue color Sundays with you here on a blog, to show you just how captivating and beautifully drawn the strip really is. Hopefully you’ll enjoy the ride so much you’ll get the book and spoil yourself with a practically complete run of the strip. But for now, just follow the label Color Sundays and begin a journey westward, to a town “so rotten it got booted out of the US of A”.

Email ThisBlogThis!Share to TwitterShare to FacebookShare to Pinterest
Labels Introduction

The label Color Sundays shows all the published color Sunday pages we have in our collections. Scans filling gaps in the run are naturally welcome.